LET’S FACE IT: The recovery in the construction materials industry has been tepid at best. Many of us would have guessed two years ago that we would be much farther along than we are today, and we predicted as much once again at World of Concrete back in February. But as fall is upon us, a raft of positive economic news made me think a surge in the construction economy is really finally upon us. Housing starts, total construction spending, cement sales figures, and new car sales all demonstrate so much underlying strength, it’s hard to believe that further growth in concrete volumes won’t follow.

In July, new housing starts were up thanks to a surge in single-family home construction, the latest sign of momentum in the housing market. Starts rose 0.2% from a month earlier to an annual rate of 1.21 million, the highest since October 2007, and the third time in four months the figures reached a new high since the recession began. “The bottom line is an explosively strong housing sector,” one analyst said.

U.S. home builders also appear more optimistic. e National Association of Home Builders’ confidence index rose to 61 in August, its highest level since November 2005. A reading above 50 means most builders generally hold a favorable view for new, single-family homes. Builder sentiment has skyrocketed in recent months. Further, a much-followed, forward-looking gauge of U.S. home purchases from the National Association of Realtors showed housing sales hitting its highest level in more than nine years in May. Another report from the group showed sales of existing homes increased 3.2% in June to a seasonally adjusted annual rate of 5.49 million, the strongest since February 2007.

Housing isn’t the only bright star on the horizon. In July, overall construction spending totaled a $1.083 trillion annual rate, the highest since May 2008, and up 13.7% from July 2014, which was the eighth consecutive monthly increase, and the fastest year-over-year growth rate since March 2006, suggesting steady acceleration in construction.

An uptick for cement 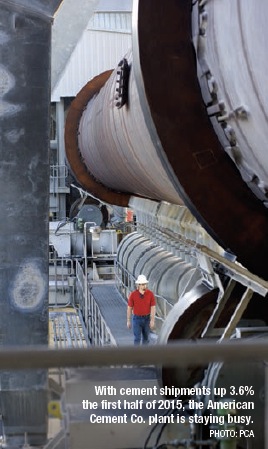 While cement sales are not on re yet, there is a steady uptick in production that bodes well for the concrete industry. The USGS Mineral Industry Survey
reported June shipments of portland and blended cement in the U.S. were about 8.9 million metric tons, up 7.6% from June 2014. Annual shipments through June totaled 40.8 million tons, up by 3.6% from 2014. Comparing the monthly figure to the average for the year indicates accelerating volume.

Finally, another big indicator many economists follow is new car sales. So why does that matter to the construction materials industry? New cars are the priciest retail purchases most households make and usually require financing. So the strength of sales over the past several months points to improving confidence among consumers in their ability to meet multi-year payments, and the same goes for their lenders. is often translates into confidence in stepping out to make a new home purchase as well. In August, automakers’ annual light vehicle sales rate was 17.7 million, which is the strongest pace since July 2005, and far better than the 17.2 million economists were expecting.

With strong growth reported in so many economic sectors, I can’t be more enthusiastic about the last quarter of 2015, and look forward to an even better 2016.